In California, the Mere Presence of Lawfully Possessed Marijuana in a Vehicle Does Not Provide Probable Cause for Police to Search the Vehicle

Home > Blog > In California, the Mere Presence of Lawfully Possessed Marijuana in a Vehicle Does Not Provide Probable Cause for Police to Search the Vehicle
Matthew Wallin
January 7, 2021

In California, the Mere Presence of Lawfully Possessed Marijuana in a Vehicle Does Not Provide Probable Cause for Police to Search the Vehicle

The Fourth Amendment to the U.S. Constitution provides the people have a right to be secure in their person, houses, possessions, and papers and that the government (i.e., police officers) cannot conduct a search or seizure, absent probable cause and the issuance of a warrant.

However, there are various exceptions to the warrant requirement, such as the Automobile Exception, “under which an officer may search a vehicle without a warrant so long as the officer has probable cause to believe the vehicle contains contraband or evidence of a crime.” People v. Hall (2020); see Robey v. Superior Court (2013).

In 2018, when defendant Dontaye Hall (“Hall”) was pulled over by police for a broken license plate lamp (Vehicle Code, §24601), the officer observed “a clear plastic baggie” of what appeared to be marijuana in Hall’s car. Based on that observation, officers searched the car and found a gun in a closed backpack. Hall was charged with two firearm-related offenses (PC §25850 (a), §25400 (a)(1)), plus the vehicle code infraction.

Hall moved to suppress the evidence discovered during the vehicle search, asserting that the officers lacked probable cause to search his vehicle and thus the search violated the Fourth Amendment. Prosecution argued that by viewing the baggie of marijuana, the officers had probable cause to search pursuant to the Automobile Exception. The trial court denied Hall’s motion and Hall appealed.

The passage of Proposition 64 in 2016 made it legal in California for persons 21 years of age and older to possess and transport small amounts of marijuana (Health & Safety Code § 11362.1(a)(1)). However, Proposition 64 does not permit a driver to “[p]ossess an open container or open package of cannabis or cannabis products.” This means that while a person at least 21 years old may possess and transport marijuana, just like alcohol, the container/package may not be “open” during transportation. 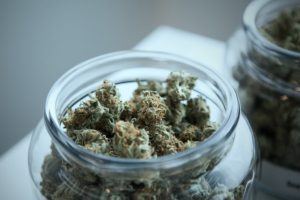 In Hall’s case, prosecution argued that the baggie constituted an “open container” and thus gave probable cause for the officers to search the vehicle for paraphernalia. The appellate court disagreed, holding that there was no evidence that the baggie observed by the officers was an “open container,” within the meaning under Proposition 64. Therefore, the Court of Appeal concluded that “the lawful possession of marijuana in a vehicle does not provide probable cause to search the vehicle.” (See People v. Lee (2019); People v. Shumake (2019); People v. Johnson (2020).)

Without probable cause to search, the officers’ search of the vehicle and the backpack was unlawful, in violation of the Fourth Amendment. The evidence obtained from the search was also unlawfully obtained and must be suppressed. The appellate court ordered that Hall’s motion to exclude the evidence of the gun be granted and proceedings to follow accordingly.

How a Wallin & Klarich Criminal Defense Attorney Can Help

This case is significant because of the applicability to other cases – possibly even yours. Where an unlawful vehicle search leads to seizure of evidence, the evidence is “tainted” and must be excluded from trial. This may even lead to the dismissal of one or more charges related to the excluded evidence. The criminal defense attorneys at Wallin & Klarich are well-versed and experienced in identifying and arguing Fourth Amendment-based Motions to Exclude or Suppress evidence. We believe strongly in protecting and defending your right against unlawful searches and seizures by the police and will make it our mission to fight for your rights in court!

With offices in Orange County, Riverside, San Bernardino, Los Angeles, San Diego, West Covina, Torrance, and Victorville, there is an experienced and skilled Wallin & Klarich criminal defense attorney available to help you no matter where you are located.